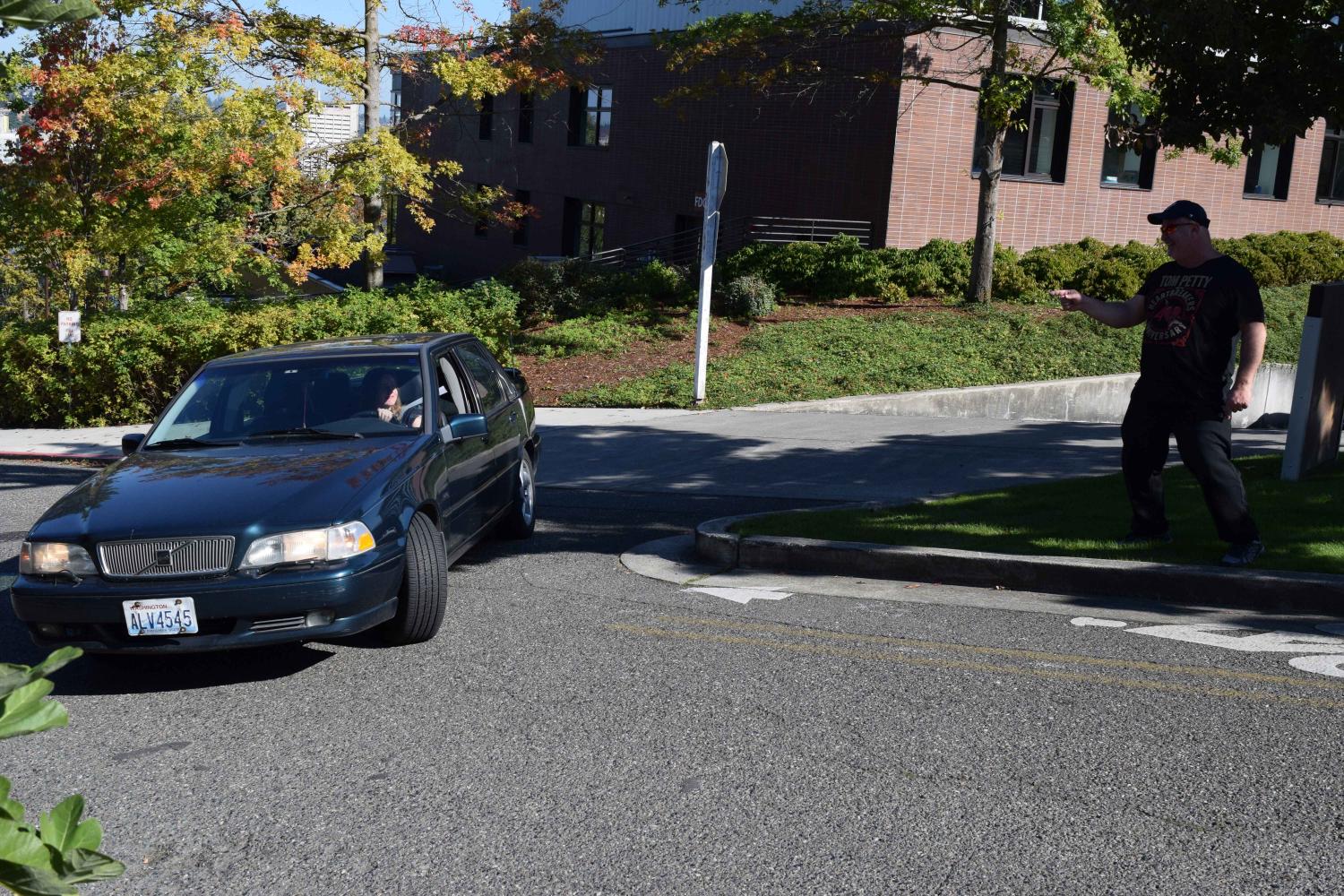 A student makes an illegal left turn while leaving the parking garage. Left turns from the garage are among the most common parking related errors that result in JUG.

A student makes an illegal left turn while leaving the parking garage. Left turns from the garage are among the most common parking related errors that result in JUG.

For years, Prep students have struggled with the everlasting problem of Prep parking.

Parking and driving mistakes are one of the most common reasons students are assigned JUG, whether it be from making a right turn into the parking garage or forgetting to park five feet from the nearest driveway parking in and around the school can be tricky.

From tips and tricks to parking stories to interviews with Mr. Burks himself, The Panther have worked to compile the complete Encyclopedia of Prep parking.

To those students frequently finding themselves in A602 afterschool for parking, read this well. Mr. Stearns has assigned JUG for parking mistakes and mishaps countless times, and is the resident master at parking.  The Panther met with this local legend and was able to get some useful information regarding the limitations of being a student driver. So here’s the facts:

What will you give JUG for in terms of parking?

Students most often get JUG for parking illegally in the neighborhood and making a left turn out of the garage.

What is the craziest reason you have given JUG for parking?

There have been some unbelievable ones, but luckily I’m good at keeping secrets!

What advice do you have for students just starting to park around Prep?

Check with Mr. Burks FIRST if you have any questions about where to park.

What are some commonly forgotten rules regarding parking?

If you are within your 6 month limit with your license, you better not be driving other students around.

We know your birthday!

Is there anything else you would like to say to students parking here at Prep?

Please be respectful of our neighbors and slow down in the garage.

From the tight spaces in the garage to the infamous yellow mark  that decorates the doors of many students’ cars, the majority of upperclassmen know the struggles of parking around Prep. With that, there are bound to be a few funny parking mishaps. Here are a couple of those stories:

Henry Hazzard ’18 parks in a very tight space that is located next to a pole. One time, he hit the pole and it left a huge yellow scratch on his car that he says was the size of his hand.  “I was nervous,” stated Henry. “Last time I scratched the car, my dad  gave me a lecture about that stuff.”

Another moment that Hazzard had was when someone stole his parking spot. He shares that he had to drop his carpool off and then drive all the way to 12th street just to find a parking spot and he ended up being late to class.

During the beginning of the year, Junior Gracie Cole and her parking neighbor Mira Wellington ’18 had a funny parking story.

Wellington parks in between a pole and another car so she has very limited space. One day, Gracie parked more towards her side. Because of the amount of space that she had left, Mira had a difficult time parking into her spot.

A couple days later, Gracie found a friendly note after school saying “thanks for giving me more space today” since she parked farther away from her car that day. “I laughed [when I saw the note],” says Gracie. “The next day I made sure to give her extra space.”

As  Senior Ashley Mah was trying to position her car into her tight parking spot, she says she bumped into a car trying to reverse, bumped into a different car while driving forward, bumped into the yellow pole reversing once again, and then finally drove away.

Traffic Coordinator Matt Burks has seen it all. One incident that he vividly remembers is the story of a girl who parked in between two faculty cars a couple of years ago.

According to Burks, the girl hit both sides of her own car on the sides of the two other cars. He thinks that she ended up crawling out of her window and then went on vacation.

To get rid of the parking “epidemic,” Burks advises to “slow down, stay off phones, pay attention, and learn how to back into a spot .”

Because of the many parking issues, it may be time to make a change to the school’s parking garage. Mayme Krueger ’19 suggests to have “bigger parking spaces and cushioning for the corners of the huge poles.”

“With great power comes great responsibility.” This quote from Uncle Ben holds true in the lives of many Prep Students, especially when it comes to driving.

A rite of passage, driving at Prep comes with risks. These include: JUG, tickets, and a car covered in yellow paint.

With waves of new drivers being registered every year, rules are bound to be broken. To reduce the amount of JUG given to students, and avoid frustrated residents of Capitol Hill, Mr. Burks (traffic coordinator of Seattle Prep) gave the inside scoop on parking.

His daily routine consists of “getting out of bed and cruising around the neighborhood (Capitol Hill).”

WV: What areas can’t Prep students park in?
MB: Any of RPZ 12. It means Residential Parking Zone 12. It’s about half a square mile.

LT: Why do some students get both tickets from the Seattle Police as well as JUG?
MB: I try not to give students JUG if they already have a ticket, but if the JUG came before the ticket, there’s not much I can do about that.

WV: What will JUG be given for, in terms of parking?
MB: Parking too close to driveways, not leaving enough room for other cars to park, being on phones, and driving too fast, and it’s not just kids doing these things.

LT: What is the most important thing you tell students who are new to parking?
MB: Driveways, loud music early in the morning, slow down, look around and watch for pedestrians…[Also,] ask me if you are unsure about where to park, stay off your phone, and learn how to back into your spot.

WV: What are some rules that are common rules?
MB: Mostly people forget that they can get JUG from speeding. Also, do not turn left out of
the garage!

LT: How often do you get complaints from neighbors?
MB: At least once a week.

Mr. Burks has seen it all. He thinks that someone locking their keys in their running car is funny. However, he does not find people hitting those yellow poles for no apparent reason when no one is in the garage amusing; he just feels sorry for them.

How to Deal With Damage

So it finally happened. The moment in every driver’s life when they look out of their window with horror and dread. Fear creeps up your spine as you are forced to accept reality. You backed up a little too far and hit a parked car. You weigh the options in your head. If nobody saw it, did it really happen? How many weeks would you be car-less if your parents found out? Are you really thinking about leaving? What do you do?

The first step is to calm down. Take some deep breaths and realize that you’ll be fine.

Next, try to think about what your plan is. Would you want someone to hit your car and drive away? What would Jesus do if he hit a car? If a bystander saw you hit the car, it could mean some hefty fines.

Then, either wait for the owner or leave a note under the windshield wipers with your contact information and insurance.

After, work out what you need to pay, and if you want file an insurance claim or settle it out-of-pocket. So when the inevitable happens, don’t freak out, be courteous and get help!

If you want a picture to show with your comment, go get a gravatar.