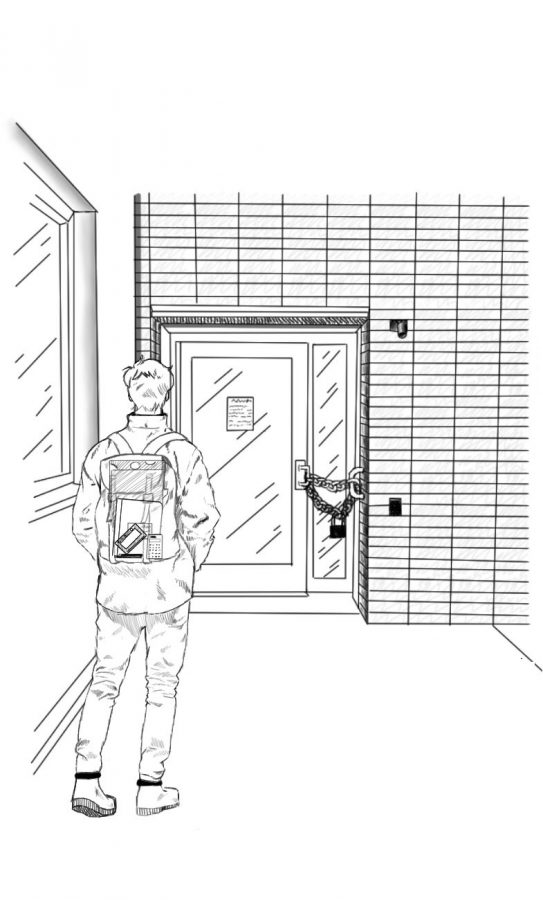 Safety concerns have become more relevant every day. Between school shootings and threats, it can be difficult for students to feel safe and comfortable when they come to school. However, school threats are an issue and there is constantly news regarding school safety.

Student reactions to school safety are varied. “I don’t think about my safety a lot, I come in knowing that I am going to be safe,” said Dean Abenojar ‘20.

David Lopez-Kyprios ’19 said, “hearing about all the school shootings across the country and experiencing threats in our own community, I feel uncomfortable at school. I don’t think that Prep is necessarily doing something wrong, it’s just unsettling.”

The Prep administration are tackling this issue by continuously making changes to improve school security, this includes the new physical changes around Prep. Although some of these improvements may be seen as an inconvenience, all these changes are necessary in creating a safe community for Prep students. Alex Battle ‘21 commented on the AMH fourth floor door being locked, “I understand why they lock that door, but I also believe students should be able to access that door – whether it means remaining unlocked unless something suspicious occurs on campus or using a student ID to get access.”

Other students agree that the closing of the fourth-floor door isn’t helping make Prep safer. “I actually don’t like that the 4th-floor door is closed. I think it is pointless. I feel like an intruder won’t come up through that way anyways…in my opinion, it is creating an even more risk,” said David Lopez-Kyprios ’19.

Another opportunity that Prep uses to advance school safety are the fire drills and local communication and relationship with police. The administration believes that with consistent practice and good relationships with local officials, Prep can have and be prepared in case of an emergency.

As well as being safe physically, Prep acts as a haven for students. Students receive tremendous support and care from the faculty and staff. “I think that Prep is safe place emotionally, physically, and spiritually,” said Emi Nakata ’22. Nakata continued, “Prep cares deeply about safety. When I come to school here I feel that my safety is guaranteed.”

Prep faculty and staff work hard to make connections with students on a daily basis, which are fundamental in a secure environment. “There is always someone keeping watching out for us, and someone to talk to,” added Nakata.

Abenojar explained, “this is my third year at Prep, and I’ve never been in a situation at school where I’ve been concerned for my safety, and that’s because the faculty does everything they can to keep me safe.” Coming to school and feeling and being safe is a necessity, Prep makes that a reality.

Does Seattle Prep do enough about safety from campus intruders? On weekends and after school hours, many of the students and staff and have noticed strangers who walk on campus. This potentially can be a grave security concern for Prep.

Seattle Prep is a small community with only about 720 students and located in a safe, family-friendly neighborhood on Capitol Hill. According to the campus security’s job description, Mr. Chism and Mr. Burks, our campus security monitors, interact and supervise students while moving from the multiple school buildings and outside areas during school hours, after school activities and evening events. They make use of the campus surveillance cameras, in between patrols, to watch activity throughout campus. They approach any unknown person who is not wearing a visitor’s badge, verify the appropriateness of the person’s presence on campus, and then assist the visitor in registering through the customary process.

Prep’s intruder safety protocols are quite different than the two publics schools, Wren High and North Charleston High, in South Carolina where our new mathematics teacher at Seattle Prep, Ms. Young, taught for the past 10 years. At both SC schools, students and guests enter through the front door of the school, which was a huge change because both schools had several doors that opened to the exterior. Students and staff are always required to wear IDs on their necks, and students would receive detention if they did not wear them.

Another difference between Prep and NCHS is the presence of police officers. At NCHS, because the school is in a high-crime area, a police officer, rather than a faculty security monitor, patrols on campus at all times.

According to Young, “over the ten years I taught in SC, the security measures changed a lot because of happenings in the news. The biggest change was the active shooter response.” ALICE (Alert, Lockdown, Inform, Counter, Evacuate) training provides a proactive plan for schools to handle an active shooter event.

Under stressful situations, school faculty members and students may not be able to effectively interpret the codes.

At Seattle Prep, Ms. Young was impressed by the silent fire drill, which was a first for her, “I think it is such a great idea because in a situation like a fire or earthquake, being able to have order and quiet could make a difference in the safety of students.”

In the years after Columbine, national statistics show that the majority of public schools have been locking and monitoring their single-entry point door and using security cameras, but relatively few schools have added metal detectors. They also have a written plan what to do in an event of a shooting and drilled students using the plan. Many communities have asked to bring in more police into schools, but civil rights groups believe that police in schools make safety worse for children due to the possible increase of severe discipline for minor infractions.

Most importantly, schools need to create an environment where students feel safe to share information. All Seattle Prep students need to be aware of new faces on campus and report any suspicious strangers on campus to administrators. In the neighborhood, it is best to walk to cars with a friend after school and during the evenings while avoiding secluded areas inside Interlaken Park even during daylight hours. Students around the US feel safer at school: In the 20 years from 1995 to 2015, the percentage of students who reported being “afraid of attack or harm” dropped from 12% to 3%.

In America’s current situation regarding school shootings it is more important than ever, that extensive measures are taken to ensure the safety of students around the country. Although it is unfortunate, the truth is that school shootings have begun to grow very prevalent in the nation. There are many roots of the problem such as mental healthcare or lack thereof, as well as gun control laws that are possibly in need of reform. Unfortunately, the reality is that changes in these areas will not likely arrive soon enough for several reasons, leaving the lives of students in jeopardy. However, while our country struggles to come to an agreement on how to solve the issue of school safety, individual schools can take certain measures to reduce risk. As students may have noticed, Seattle Prep has begun to further consider the safety of students.

Mr. Burks, neighborhood prefect at Seattle Prep offered some information regarding how the school plans to protect the campus, and the reasoning behind some of those tactics. A main question posed by many students this year: why lock 4th floor door of AMH, while many other doors are unlocked. Mr. Burks explained that “nobody is keeping an eye on it”. However, that leaves many students wondering why none of the other doors are locked. Mr. Burkes also listed the backfield entry to McDonnel, and the roadside entry to Ignatius as locked. While no single entity makes these security decisions, Burks mentioned, decisions and solutions are “run through a bunch of folks” and that some security advisers came to the school in order to point out potential safety flaws regarding the school’s layout. As many students may recall, last year, members of Seattle Police Department were spotted at Seattle Prep on various occasions. He stated that unlike several public schools, we don’t have any police officers on campus.  Burks optimistically pointed out, through the meetings, the staff hoped to “get more friendly” with the police apartment in case of an emergency.

Despite causing time delays while transitioning in and out of classes, it is important to remember that the faculty makes all decisions in the best interests of the students. What is more important, a minor delay in arriving at the next class, or potentially saving student lives? Aside from implementing these safety features on our campus, it is vital that our faculty and students are aware of them in order to ensure optimal safety conditions for those learning and working at Seattle Prep. We live in a society where going to school holds danger, and until that changes, and the possibility of a threat must be on the minds of students. While it would be reassuring to say that there is no risk or threat to Seattle Prep, it has to be taken into account. At Seattle Prep our goal is to have such great safety conditions that they need not cross our mind.

Prep students have noticed new safety features all over campus. The Panther talked to Mr. Stearns to get the scoop about these changes.
The motivation for these changes was based in a constant goal of keeping Prep as safe as possible. The school brought in an outside auditor to check out the state of safety around campus. Generally, Prep is a very secure school, and has strict protocol to prevent any possible threats. One particularly controversial change is the closure of the fourth floor door to AMH. The result is a mass of students clogging the walkway outside the entrance to Adelphia. “We keep all of the doors that are facing the plaza unlocked during school hours, and all doors on the outside of the buildings locked during school hours. The fourth floor door was a sort-of grey area that we decided to make a change to this year.” Students are concerned about how this line to get in the building will work out during the colder, rainier months. Kellie Sommerville, ‘20 said “I am not looking forward to having to stand outside in the pouring rain trying to get to my class. I hope we can figure out a solution!” Many students are wary of this inconvenience and feel like it is a waste of time during the school day.
Teachers undergo training each year to maintain a consensus on how to best manage student safety at Prep. Mr. Stearns gives a presentation to make sure that all teachers are on the same page for lockdown, earthquake, and fire safety. So what is the biggest takeaway according to Mr. Stearns? “Prep is a very safe school for students emotionally, because of positive student-teacher connections. It’s very important that students understand to say something if they see something.”

If you want a picture to show with your comment, go get a gravatar.