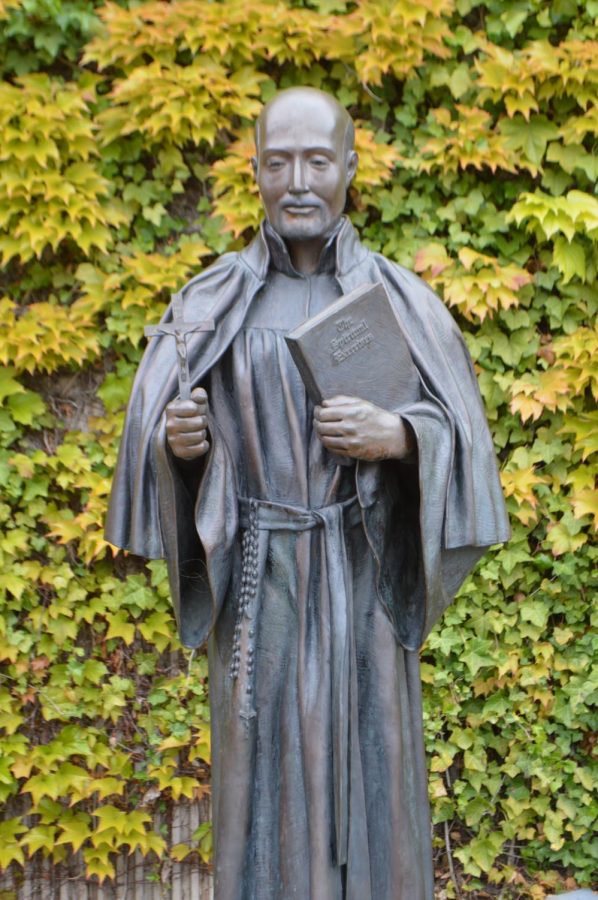 St. Ignatius was on the path to military fame when a cannon ball broke his leg. During his recovery, he spent his time reading about Christ and the lives of saints. Upon seeing Mary in a vision, he made a pilgrimage to her shrine at Montserrat and he became the founder of the Jesuits. His teachings and philosophies are central to the Seattle Prep community.

As the student body passes the St. Ignatius statue each day, St. Ignatius and his Jesuit teachings remain prevalent in the lives of students. Isaac Trius ’21 stated, “The Iggy statue is a reminder of his noble history and the path he paved to get us where we are today”. Senior Molly Moffit said, “St. Ignatius means unity of the Seattle Prep community. He is a daily reminder to be men and women for others”.

With a “Mona Lisa smile” as Mr. Mack describes, the short statue of St. Ignatius stands tall on a pedestal, overlooking the plaza. Mr. Mack explained that he enjoys seeing St. Ignatius all dressed up in Prep spirit gear for evets like homecoming and retreats. Mack called him “a big Prep supporter”.

Faculty members also express their fondness of this unifying statue. Mr. Chism describes the thing he loves most about the statue is that it is, “is a meeting spot for various activities on campus that brings people together”.