Miracle at Memorial: Prep beats O’Dea for the first time since 1980. 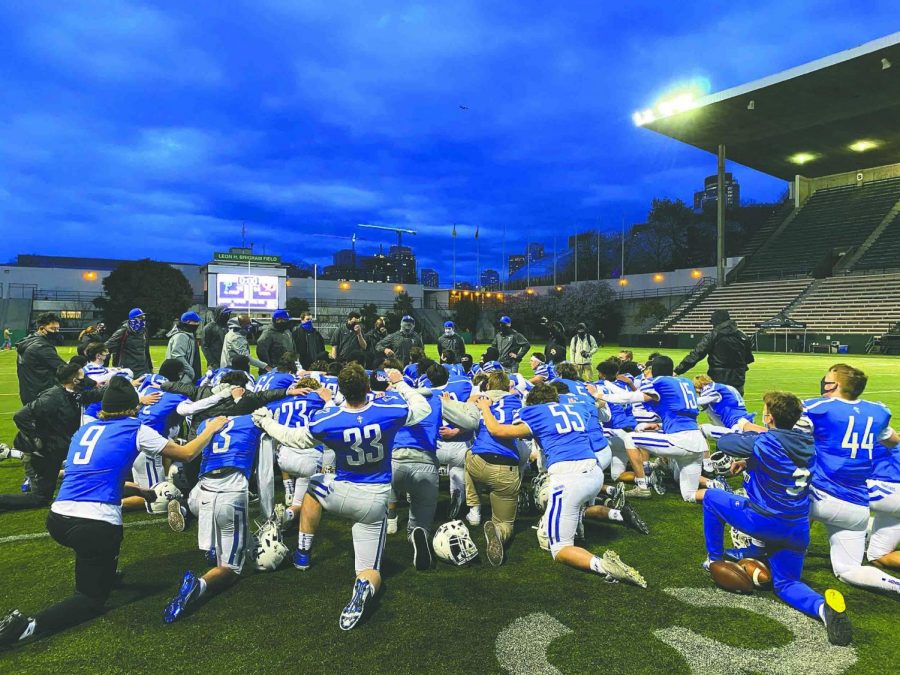 The phrase “Anything can happen” came to fruition in the dying moments of Seattle Prep Football’s upset win against the historically strong O’Dea squad.

In 2011, an undefeated and eighth ranked Prep squad faced off the third-ranked O’Dea. In a grueling back and forth match, Prep would fall short 21-20 after failing to convert a last-minute two-point conversion. Until 2021, the game in 2011 proved to be the closest Prep came to beating the Irish in recent memory.

Rolling up to Memorial Stadium on Friday, March 19th, the Panthers knew that this was going to be a tough match as starting quarterback Jake Sype missed the game with a bruised Achilles suffered from Prep’s win over Garfield in the previous game.

However, this injury did not demoralize the team, as junior ‘jack-of-all trades’ Braeden Smith stepped in as quarterback.

“We were confident in his ability since he’s incredibly mobile. The only thing we were worried about was that he wouldn’t be able to catch the passing game, but in the end, it turned out well,” said offensive guard and defensive tackle Moses Dagmawi ’22.

O’Dea scored first, to cap an 80-yard drive late in the first quarter, despite a stubborn Panther defense. In the second quarter, Prep responded with an 11-yard touchdown pass to tie up the game. However, by the fourth quarter, O’Dea took a 14-7 lead.

Prep was poised to tie up the game late in the fourth when QB Smith went for it and converted a crucial fourth down pass to senior Kendin Alexander in O’Dea territory. However, Smith’s next pass was picked off by O’Dea who took possession.

“At that point, I almost turned off the TV because I was so frustrated,” said spectator Marcus Tomici ’22.

However, Tomici would be lucky that he didn’t turn off that TV as Seattle Prep’s defense delivered a stop forcing O’Dea to punt, giving the offense one more chance with only 1:08 left.

What came next was a miracle at Memorial, as with less than 1:08 left on the clock, the Panthers would drive 50-yards down the field, culminating with Senior Alijah Vaouli-Buchanan’s three-yard run for a touchdown to pull within one point of O’Dea with less than three seconds to go.

“We put everything on the field so we’re not going to overtime!” said Dagmawi ‘22.

Immediately after the touchdown, Vaouli-Buchanan charged his way into the end-zone scoring the two-point conversion right with the clock at zero, lifting the Panthers to a 15-14 win against the Fighting Irish.