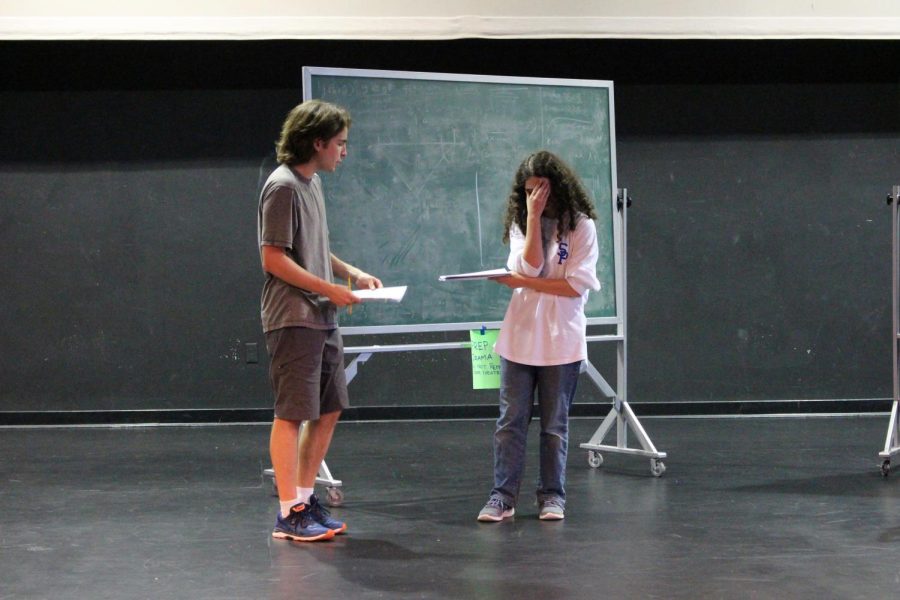 Cast members rehearse for The Curious Incident of the Dog in the Night. The show opens on October 25,

This year’s fall play is The Curious Incident of the Dog in the Nighttime, a Tony award winning play that includes important themes of understanding and acceptance relating to social justice and societal norms. The plot follows the main character Christopher, who views the world from a very unique perspective. Christopher is afraid of being touched by others and is distrustful of strangers, but he is also very smart.  The play begins with Christopher’s quest to discover who killed the neighborhood dog which “takes him on an unexpected adventure of self-discovery and bravery” according to Mr. Othman, the Seattle Prep theater director.

The theater program is excited to have started rehearsals and challenge themselves to take on the role of their characters, especially Apollo Jones ’22 who is honored to be the only freshman in the play. He stated, “I love this play so much. It shows that you can’t just judge someone by what they seem at first, and the way they illustrate how Christopher’s mind works is truly fantastic.”

Jonah Cavanaugh ’20 has the challenging task of playing the main character Christopher who has been labeled as an outcast by society. The play allows audiences to see the world from Christopher’s unique perspective, which Cavanaugh has been doing his best to capture. He said, “it has been fascinating to look through eyes that see a different world than mine.”

While neither the book nor play state that the main character is on the autism spectrum, many readers believe that he is. Mr. Othman is challenged with leaving this characterization open to interpretation so viewers can choose how they relate to Christopher no matter his circumstance. He stated that, “the play allows us to discover who this young man is, without preconceived labels.”

The theater program is adamant about respecting what the book leaves open to interpretation which is difficult when trying to place the viewers in the realm of the story. The challenges of portraying a character like Christopher on stage are accurately displaying “how he thinks and responds to the world” said Mr. Othman.

The cast and crew of The Curious Incident of the Dog in the Nighttime are extremely fortunate and excited to be given the opportunity to work with guest speakers, who will be giving insight into how to accurately portray Christopher on the stage throughout the rehearsal process. The speakers include Mrs. Regina Melonson, who works in Seattle Prep’s LRC. She will “be sharing information with the cast on those who ‘learn differently’ and how they interpret the world” said Mr. Othman.

Cavanaugh has also been given the opportunity to work with local professional actor, Michael Krenning who has played Christopher before in the Village Theatre’s production. Othman added that Krenning will assist Cavanaugh  in bringing “a sense of authenticity to the role.”

The storyline of the play displays important values that reflect the mission of Seattle Prep through challenging societal norms and learning about how others view the world. The play takes on social justice issues, which reflect the Seattle Prep value of commitment to justice

Junior Evie Byers encourages all students to come see this play, she expressed how hard the cast has been working in rehearsals. She stated, “This show is hilarious, sad, and touching and will take the audience on an unforgettable emotional rollercoaster.”

Students can come see the play when it runs October 25 through November 2. To provide some insight into why the play is a must see, Mr. Othman said, “Everything about the show is different, from the way it is staged, to the way the characters unfold the story. We have an amazing program with so many talented students. This show is something that is going to challenge them to grow both as actors and, more importantly, as young men and women.”

This play will likely make viewers question their place in society and in what ways everyone is an outcast.